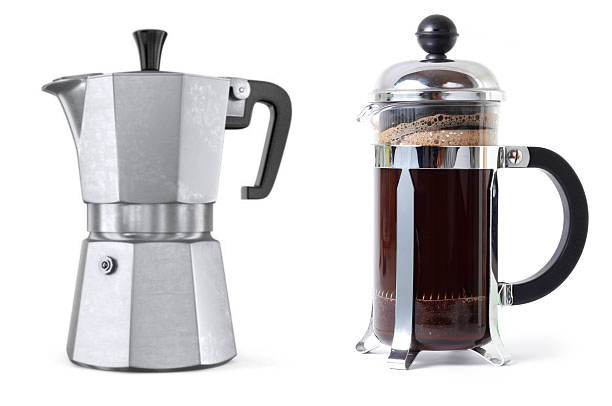 The age old question of which coffee maker reigns supreme – the Moka pot vs French press? It’s not so dramatic but it has continued to be discussed by coffee fans everywhere in Europe. Both have their own unique benefits and drawbacks, so it can be tough to decide which is best for you.

If you’re like most coffee drinkers, you probably have a few different methods for making your morning cup of Joe. You might use a standard drip brewer, an espresso machine, or even a manual French press. But have you ever tried a Moka pot? In this article, we’ll take a look at the Moka pot vs French press debate and help you decide which one is right for you.

What Is A Moka Pot?

A Moka pot is a coffee maker that is designed to brew coffee by passing hot water pressurized by steam through ground coffee. It is named after the city of Mocha in Yemen, where coffee was first exported from. The Moka pot was invented in 1933 by Italian engineer Alfonso Bialetti and continues to be manufactured by his family’s company, Bialetti Industrie. 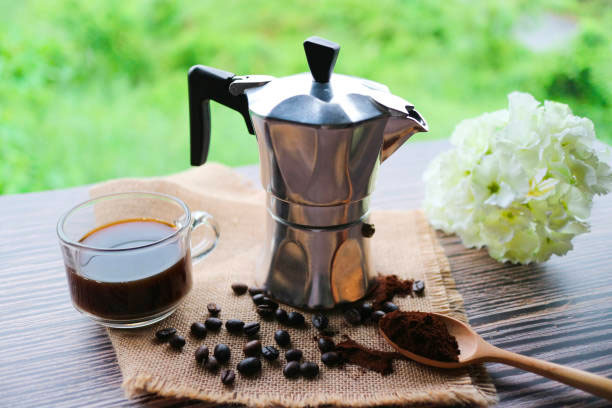 Moka pots are available in a variety of sizes, from small two-cup pots to large twelve-cup pots. They are typically made from aluminium or stainless steel, although some models are made from glass or plastic. Moka pots can be used on any heat source, including stovetops, campfires, and even camping stoves. 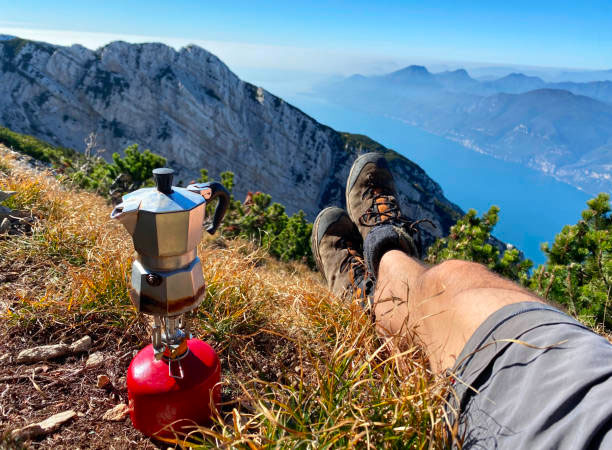 Brewing coffee with a Moka pot is a relatively simple process. First, the upper chamber is filled with cold water and the ground coffee is placed in the filter basket. The pot is then placed on a heat source and brought to a boil. Once the water has boiled, the steam will force the hot water through the ground coffee and into the lower chamber. Once all of the water has been forced through the coffee, the pot can be removed from the heat source and the coffee will be ready to drink.

Moka pots produce a strong, flavorful coffee that is similar to espresso. The coffee is typically served in small cups or glasses, and it is often sweetened with sugar or milk. Moka pot coffee can also be used to make other specialty coffees, such as cappuccinos and lattes.

What Is A French Press?

French presses are basically containers used to steep loose coffee. It has a plunger which can be used to decant coffee once brewed. It’s a unique French invention. According to legend French newspapers were founded in the late 1800s and were primarily created by French people. Thirsty for a good brew, he heated a little water in a pot over a hot stove top. Once coffee grounds are dissolved into hot water, they rise up on top of each liquid. 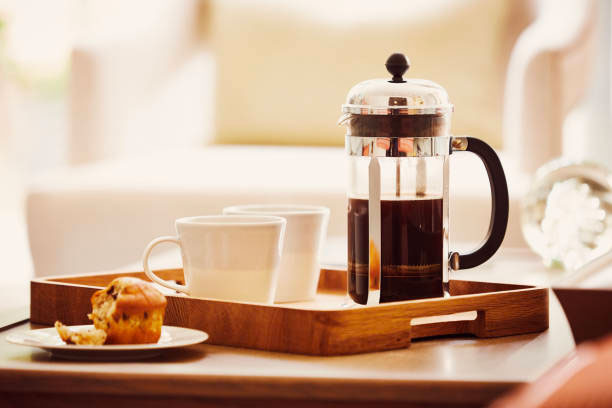 A French press, also known as a press pot or coffee plunger, is a type of coffee maker that brews coffee by steeping ground coffee in hot water and then pressing the grounds to extract the liquid. French presses are typically made from glass or metal and have a plunger with a metal filter that fits snugly into the pot.

Brewing coffee with a French press is a relatively simple process. First, the ground coffee is placed in the pot and hot water is added. The pot is then placed on a heat source and brought to a boil. Once the water has boiled, the plunger is pushed down slowly, pressing the grounds to the bottom of the pot. After about four minutes, the plunger is pushed all the way down, trapping the grounds at the bottom of the pot. The coffee is then ready to be poured and enjoyed. 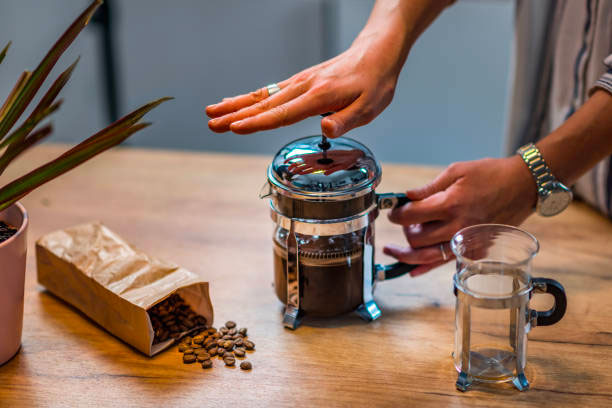 French press coffee makers come in a variety of sizes, from small two-cup pots to large twelve-cup pots. They are typically made from glass or metal, although some models are made from plastic. French presses can be used on any heat source, including stovetops, campfires, and even camping stoves.

French press coffee is usually less bitter than coffee brewed with other methods, and the flavor is typically more complex. French press coffee makers can also be used to make other specialty coffees, such as cappuccinos and lattes.

Moka Pot vs French Press: What Is The Difference?

These two are particular coffee machine types. Compared to Moka pots which produce solid brews, France Press and Cafetiere produce a rich, fuller flavor. There’s a difference between them.

If you’re a coffee lover, then you’ve probably brewed coffee using both a French press and a Moka pot. But which one makes the best cup of coffee? 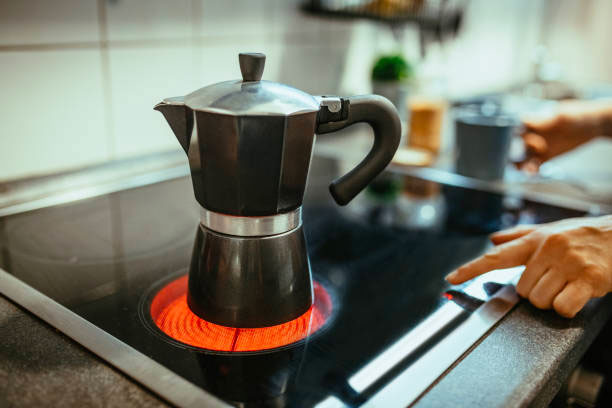 Another difference between these two types of coffee makers is the size of the final product. A Moka pot produces small cups of coffee, while a French press can make up to four cups at once. If you are looking for a quick cup of coffee in the morning, then a Moka pot is the way to go. However, if you want to enjoy a leisurely cup of coffee with friends, then a French press is the better option.

It is important to consider the price when choosing between these two types of coffee makers. A Moka pot is typically more expensive than a French press, but it will last longer and produce better-tasting coffee. If you are on a budget, then a French press is the better choice. However, if you have unlimited funds, then a Moka pot is the better investment. Whichever type of coffee maker you choose, make sure to follow the manufacturer’s instructions carefully to get the best results.

Finally, when it comes to coffee taste, the Moka Pot typically produces a stronger and more intense brew than the French Press. This is because the Moka Pot uses pressure to force hot water up through the coffee grounds, resulting in a more concentrated cup of coffee. The French Press, on the other hand, relies on gravity to slowly steep the coffee grounds in hot water, yielding a less powerful beverage.

Which Has More Caffeine: Moka Pot or French Press?

Moka pots and French presses both contain caffeine, but the amount can vary depending on the brewing method. Moka pots typically have more caffeine than French presses because the coffee is in contact with the water for a longer period of time. This allows more of the caffeine to be extracted from the beans into the cup.

The study showed that 100ml of coffee in a stovetop espresso maker contains 219mg of coffee, whereas the coffee in 100ml of French presses contains 74mg of caffeine.

However, the amount of caffeine in both types of coffee can vary depending on factors such as the type of bean used, the grind size, and the brewing time. So, if you’re looking for a caffeinated pick-me-up, a Moka pot may be your best bet.

FAQs on Moka Pot vs French Press: The Non-Automated Battle

Is a Bialetti A French press?

No, a Bialetti is an Italian company that produces coffee makers. French presses are a type of coffee maker that uses a plunger to press hot water through ground coffee beans. May be you interested in “Bialetti Mini Express Review – Best Small Espresso Machine for Everyday Use“.

Can you use a French press for espresso?

A French press can be used to make espresso, but it will not produce the same results as an espresso machine. The French press is a coffee brewing method that uses a plunger to press hot water through ground coffee beans. This produces a full-bodied coffee with a rich flavor. Espresso is a type of coffee that is made by forcing hot water under pressure through finely ground coffee beans. It is typically served in small amounts and has a strong flavor. While you can use a French press to make espresso, it will not have the same taste or consistency as espresso made in an espresso machine. Read more: “How To Make Espresso In A French Press (8 Easy Steps)“.

Can you boil water in a French press?

Yes, you can boil water in a French press. Some people even prefer to do this because it can help improve the taste of the coffee. There are a few things to keep in mind, though. Boiling water in a French press can cause the coffee to become more acidic, so you may want to adjust your brew time or ratio accordingly. Additionally, make sure not to overfill the press since this could also lead to problems with extracted coffee flavors. Finally, be careful when pressing down on the plunger after boiling as hot water can escape and burn you.

What coffee makers do Italians use?

There are a variety of coffee makers that Italians use, ranging from stovetop espresso makers to electric drip coffee makers. While each household has its own preference, some of the more popular brands include Bialetti, Gaggia, and DeLonghi. Some Italians even prefer to make their coffee using a Moka pot, which is a type of stovetop espresso maker. No matter what type of coffee maker is used, Italians typically take their coffee very seriously and take great pride in brewing a perfect cup.

In the end, there is no clear-cut winner in the Moka Pot vs French Press battle. Both brewing methods have their own unique benefits and drawbacks that make them appealing to different types of coffee drinkers. If you’re looking for a quick, easy way to make a delicious cup of coffee without any automation, the Moka pot is definitely your best bet. However, if you want something that will produce a richer, more complex flavor profile with minimal effort, the French Press is hard to beat. 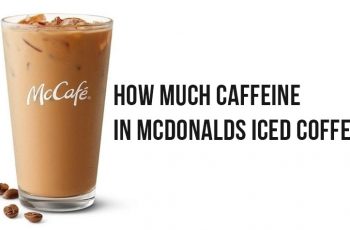 How Much Caffeine In Mcdonalds Iced Coffee? How much caffeine … 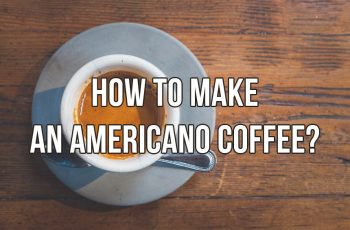